First the headline on Drudge Report yesterday warned, “US Military Closing Airspace around LAX” or something dramatic. I can’t remember his exact words but next time i’ll try to remember to screenshot his headline.

I guess So Cal residents were “freaking out” last night as they were about to be Nuked or invaded by Aliens or suffer some other Hollywood Blockbuster worthy event as CNN reports here. Reports flooded twitter, facebook and YouTube that there was a big bright blue UFO exploding over Los Angeles last night like in this video below.

PROFANITY ALERT Turn down your volume if you have kiddies around or just prefer not to hear the swearing. While these Los Angelinos insist “it had to be a UFO” there is another explanation. (the “explosion” starts at about 1:09)

Here is the the Navy’s official statement on the event from the Third Fleet’s Cmdr. Ryan Perry via Channel 7, an NBC affiliate in San Diego:

“Navy Strategic Systems Programs conducted scheduled Trident II (D5) missile test flight at sea from USS Kentucky, an Ohio Class SSBN, in the Pacific Test Range off the coast of Southern California. The tests were part of a scheduled, ongoing system evaluation test. Launches are conducted on a frequent, recurring basis to ensure the continued reliability of the system. Each test activity provides valuable information about our systems, thus contributing to assurance in our capabilities.

The missile was not armed. Strategic Systems Programs does not routinely announce missile testing. Information regarding the test launch of Trident II (D5) missiles is classified before the launch.” 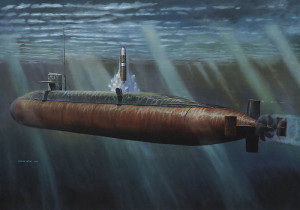 The US Navy explanation seems to check out. Other bloggers have screenshots of marinetraffic.com last night which show the entire area between Pt Mugu and Santa Cruz Island offshore blocked off by the US Navy and the USS Independence Combat Littoral Ship patrolling the area. The USS Kentucky was underwater and the launch of the ICBM probably would have been much more impressive from the bridge of the Independence than any YouTube video.