I was driving around the back of Waianae Valley on Oahu earlier this month and saw a unique mountain I have never noticed before. It immediately struck me as a mesoamerican style step pyramid.

My LDS friend in the car just shook her head as if to say “I told you so” and suggested I research if anyone else has ever looked into it. Well nobody has. Nothing on line. Here were the first screenshots I took off of google earth. 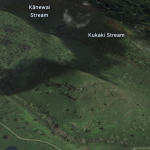 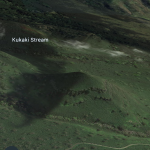 (Mormons believe ancient races of humans called Nephites and Lamanites lived in the Americas and Polynesia. I’ve always had problems with basic Mormon theology. I won’t say Joseph Smith was right on this point but I will suggest he was at least more accurate than the atheists and the university historians, and I love my Mormon friends).

These ancient megalithic sites around the world point to a much different version of history possibly than we have been taught in our schools. It appears we may have a rather large megalith right here in Waianae. 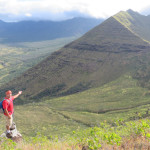 I ran a quick search through google for a variety of other querys such as “Waianae Pyramid” etc and a few hiking pages show up right away, but they are describing a long ridge over Nanakuli, not the same structure I am looking at in Waianae Valley.

It got me thinking maybe there is more than one pyramid on the Waianae Coast so before taking another drive out there I decided to do a little more online research. 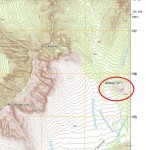 “Hawaiians named everything”, is what a fellow hiker told me today as I did my first recon hike to the mountain. He got me thinking.

The best place I knew of for Hawaiian place names are old USGS Quadrangle maps. I pulled up the Waianae Quad on line and got the name… Kōleali‘ili‘i. It’s even square on the Quad map so that was encouraging.

I had no idea what Kōleali‘ili‘i means and Wehe’wehe came up blank but i was phoned by a good friend after posting this on Facebook. He explained to me its meaning. Broken down its Kolea li’i li’i = “little kolea”. Kolea is the migratory bird that Polynesian navigators followed to find Hawai’i and Tahiti. li’i li’i is “little” so little kolea. Very interesting.

Hawaiian Navigators used the stars to find their way across thousands of miles of open ocean. Birds have been used to find islands by sailors all around the world. This gives our pyramid an astrological and navigational connection. Now I must wonder if there’s a little kolea, should we also begin looking for a big Kolea?

The geometry of Kōleali‘ili‘i is unmistakably linear with defined edges and defined steps. It is a 4 sided square mountain. It is mathematically a pyramid. The only debate now is whether it is man made or natural.

Now if Kōleali‘ili‘i is a man made pyramid then it would make sense it should line up geometrcally and latitudinally with other known pyramids.

I fired up Google Earth and started drawing lines. Ill show you what I found in a clockwise order starting from center.

The first line from center goes almost right along the 21.30 North lat line over the Pacific Ocean, crosses the Calzada de los Muerto and goes right up the stairs to the capstone of the Pyramid of the Sun in Teotihuacan, Mexico.

I cant tell you how excited I was. I was certain I found something and if I was right, more matches would be quickly found.

The pyramids in Waianae and Mexico both seem identically lined up. I did not measure but looks approximately 30 degrees off North. They follow the sun and the equinoxes so this makes sense also astrologically.

The next line was the SW corner of the pyramid. I drew it out as far as the South Pacific and just started looking at islands. I couldn’t make a match but then discovered a small island visited by Thor Heyerdahl 50 years ago.

Thor Heyerdahl was the organizer of the Kon Tiki expedition where he intended to prove the possibility of ancient transoceanic contacts between distant civilizations and cultures, such as Polynesians and Egyptians.

Check out the strange ruins on Rapa Iti and see if it doesn’t look like some ancient megalith. Our SW line goes right through it. My friend also explaine to me “iti” is the same word phonetically as li’i in Hawaiian. Rapa Iti literally means “little Rapa”… Another hint!

The next line I drew was the SE line and it goes right past Hidden Treasures store in Makaha which oddly enough, has a pyramid over its entrance. 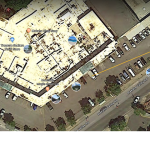 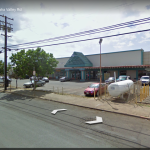 Not really happy with the mall in Makaha, I ran the line out across the Pacific hoping to hit Nan Madol on Pohnpei but it’s also about 20 or 30 degrees off. The line ALMOST hits Kosrae which has some hidden megaliths there on Lelu Island but it was not close enough for my line either. 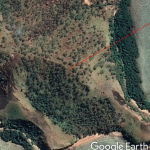 I would run the line all the way to Papua New Guinea (PNG) and it goes into downtown Port Moresby where the locals all know there is a pyramid like structure on the SW entrance to the main harbor.

I can’t really point to anything conclusive along this line but It’s OK because I did not know Kosrae or PNG had megaliths until I began this research yesterday. Now I do! I’ll bet you my reader didn’t know they were ancient structures on those islands either now did you? 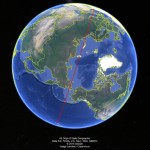 The last line would be the NW line. Initially I wasn’t too excited about this direction because I didn’t think it would hit anything. I ran it up the computer screen and it went through the Aleutians and off across the Arctic Ocean. I was pretty sure it was a dead end until i flipped the globe around. Can you see where that line is going? 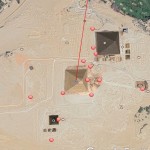 Yeah, that’s Giza, Egypt.  Mean, eh? That pretty much closes the deal for me. I’m mostly convinced at this point.

So what the heck is really going on here? People want to tell me its “Mu” or “Lemuria”. These are basically Polynesian Atlantis like stories. My quick research shows me Mu and Lemuria may possibly be channeled names. The research behind Mu is often new age or occultic. Be careful. 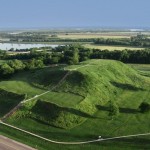 The last line which was the NE line ran across the USA and right through St. Louis Missouri. I know there are ancient mounds across the US Midwest so zoomed in and found ANOTHER direct hit. My last line hits the largest of the Cahokia Mounds.

These mounds are well buried underneath dirt and would be similar to what we see in Waianae. Ancient pyramids covered in dirt from a global cataclysmic flood.

There is an ancient book that tells about our origins, our genealogy and genetics. No its not a Mormon document (sorry). The same root word for gene-tics and gene-alogy is the first book in the Bible, it is Gene-sis.

In the 6th chapter of Genesis is described the antediluvian world. Our planet as it existed before a global flood that was judged for its continuous evil by the creator. Occultists call it Atlantis or Mu. Whatever its name was. I think were all talking about the same thing and the evidence is here in plain sight. 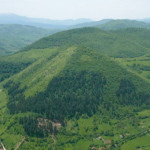 A global flood might leave pyramids more exposed out in the desert like Giza but what I think is going on in Waianae is a buried pyramid. Similar to the Cahokia mounds or the Bosnian pyramids.

I have always thought the larger Heiau’s in Hawaii were very pyramid like. Pu’ukohola on the Big Island, Hale O Pi’ Ilani on Maui and Ulupō on Oahu all look like small pyramids to me. Maybe these Heiau and temples placed all around Hawaii, Micronesia, and the Pacific are indeed designed after more ancient, larger megaliths which have been mostly lost under water, over time, through erosion, and more recent volcanic episodes.

I want to share one last view with you from Google Earth. Look at the layout of Ka’ala and imagine her before the deluge. Imagine Ka’ala possibly as grand as Maui’s Haleakala before the great flood of Noah. Imagine a great ancient civilization living underneath Ka’ala’s leeward side. The Heiaus and Pyramids and the name of the mountain in Nanakuli (Heleakala) are all possibly hints to something much greater once upon a time. 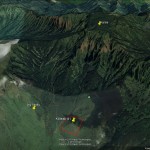