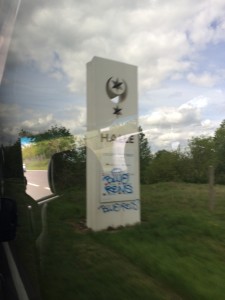 So on my way into Amsterdam last week we were asked to divert into Leipzig for operational reasons.

I’ve been into Leipzig maybe a hundred times but this was only maybe my 4th stay in Halle and I believe my first daytime arrival into Halle. For whatever reason, this was the first time I noticed the symbol for Halle upon entering the city. I was able to snap a quick picture of it.

Turkey and the Muslim countries are first to come to mind, but the US State of North Carolina, many other city municipalities and even a Rugby team (Saracens F.C.) use the crescent moon and star as their symbol. The crescent moon also represents one of the highest orders in Freemasonry, the order of the Shrine or “The Shriners”.

The overwhelming thought in my head wasn’t any ancient imagery though. I was hungry. The main objective this day was first and foremost, to get some hot food.

Taking a walk in Halle now for possibly the first time during normal daylight hours, I started to notice right away the crescent moon and star was everywhere in this city. it is in fact their ancient coat of arms. I started taking more pictures. 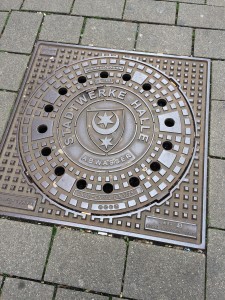 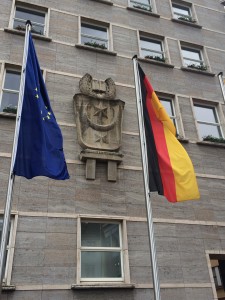 On our way down to the Schnitzel (German for hot food) place, next thing I notice the symbol plastered all over the manhole covers and the side of municipal buildings. Its funny how I had been here at least three other times and never saw it anywhere. Now I can’t NOT see it. Here are a few other places I saw the crescent moon and star in Halle Germany. 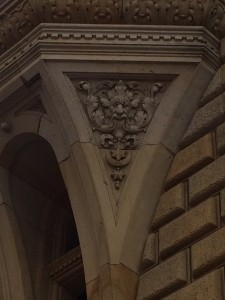 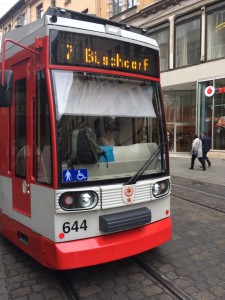 Can you see it? It’s right on the front of the train. Too funny how the brain works and how these symbols are all around us but we often don’t register them in the conscious. There are right in front of you, as they say, hidden in plain sight. 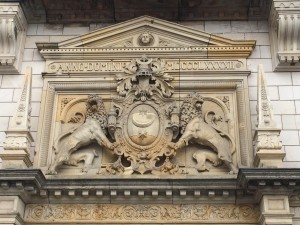 This sculpture one was on one of the older buildings in the market area. There’s many other esoteric symbols on the sculpture besides just the crescent moon and star. Can you name any more? The two obelisks are pretty obvious and so is the sun symbolism at the top and the “lions gate” and “Isis” imagery are all hard to miss, but to the untrained eye its “just a sculpture”.

Well after that walk I was convinced there had to be a hidden history behind the city of Halle. So I went back to my room and began researching Halle and the crescent moon. Guess what I found? Dipkis! Absolutely nothing! Best I could come up with on Google was that according to the German Wikipedia, nobody knows what the symbolism means. Wait, what?

People obviously know what it means. I know what it means. I just wanted to know why the Ancient German Saxony city of Halle was using the crescent moon and star as their banner. Are they ancient moon worshippers or more modern freemasonic shriners? Probably a little of both. Maybe a lot of both.

I began to put together my theory overnight and went to sleep on it. I decided that if my theory was correct, I might find the answer tomorrow in the Market Kirche (Church) which held the position of being the center of the ancient and modern town of Halle. Its gothic design is clearly masonic and whoever built it was going to be “in” on the secret of Halle’s banner. Guaranteed. 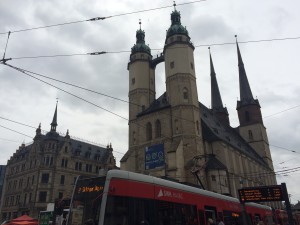 The full name is the Marktkirche Unser Lieben Frauen which translates into English as the “Market Church of our Dear Lady” and it is a classic gothic cathedral reminiscent of the Cathedral of Notre Dame (in French = Our Lady) or Monasterio de Santa María de Guadalupe in Spain. The wikipedia does a good job at presenting the history of the Kirche who is often referred to as the Liebfrauenkirche or just Market Kirche for short. (They also have better pictures). 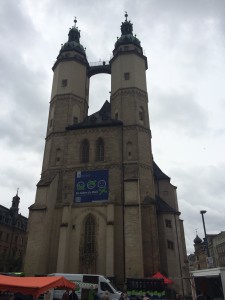 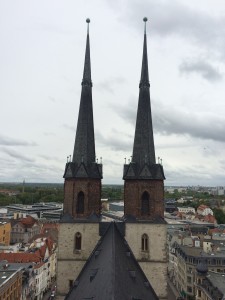 The church leaves one of their steeples and the high bridge open to the public, so before I went inside the cathedral proper, I took the climb and got a few pictures of the city below. What fun! 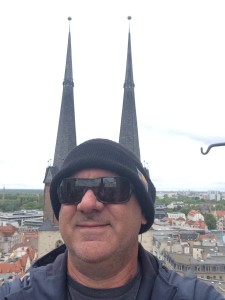 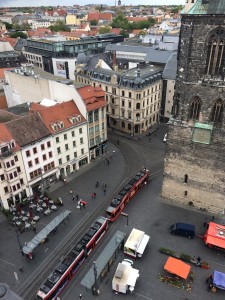 With my antennas up now I felt fully enlightened and ready to enter the temple below. There is a belief that across Europe especially, but all around the world really, that there was a “Christianization” of ancient pagan temples. The most famous being the Vatican and Notre Dame which are thought to be built over ancient temples of Jupiter.

My theory was that upon entering the Market Kirche below, I would immediately find the crescent moon and star inside, as I was now certain this was a temple dedicated to Isis or Ishtar. (The Eastern Star or East Star = Ish-tar = Easter). Would my theory hold? 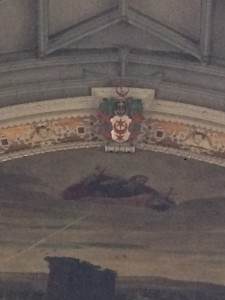 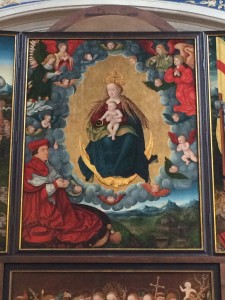 It was too easy.

No, it wasn’t Jesus being worshipped in this cathedral. Just like Notre Dame (Our Lady) in Paris, or the Hagia Sofia in Istanbul, (See my previous post “Bohemian Rhapsody, Hagia Sofia, Mary and the Divine Feminine“) this is another gnostic temple where the goddess is venerated. 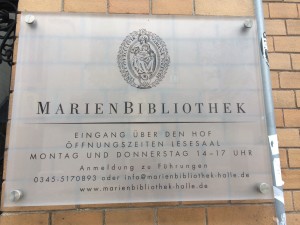 I’m sure I could find out more in this library (Bibliothek = Library) just adjacent to the Church. Oops, there’s the crescent moon and star again. Just a coincidence, again?

I really would like a day to browse in the Mary Library but I don’t read German very well. And there you have it, the reason symbols are found all over the world. These symbols are a language all on its own. It is a form of communication. “The goddess is worshipped here”.

The Marian Kirche in Halle is indeed dedicated to the ancient fertility goddess represented by the crescent moon and star since ancient antiquity. I don’t have any evidence the Church is built over any ancient pagan site like the Vatican or Notre Dame but its a safe bet.

Whoever established Halle in ancient times worshipped Ishtar, Astarte, Isis or Venus, Diana, Artemis, or whatever you want to call her. The descendants of these Pagans, along with the rest of Europe, later “Christianized” the goddess and call her Mary today but the crescent moon and star give her away. This isn’t Mary. She is the goddess Ishtar/Isis. 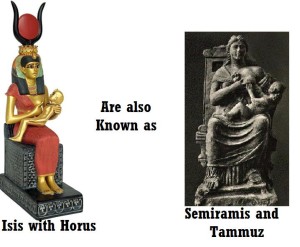 The Gnostics celebrate her to this day. This is an enlightening article here. The Hidden Secrets of Notre Dame and the Parisii of Isis. They are two different churches but many of the same principles apply.

Well before I could walk away I had to grab another picture of the iconography below the Madonna. This one was really weird! Make it big and see if you can spot the dragon behind “baby nimrod / baby Jesus”. 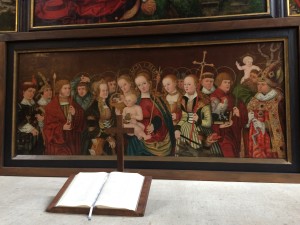 What the heck people!

As I was walking out of the church on my way to find dinner again, my eyes caught the crescent moon and stars one last time. It is the arms of the clock on the 5th tower which sits independently like its own Egyptian obelisk. Two more smaller obelisks are right above the clock on the tower if you have eyes to see. 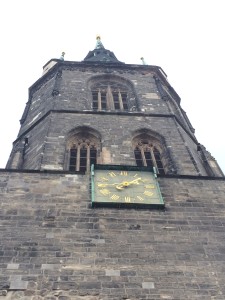 Look closely! They are right there.

That’s about it for this episode of the Aloha Underground. We will see where God or fate takes me next. I love visiting these ancient places. Please leave a comment below and subscribe! Aloha!