It is an odd fact of life that sometimes we can be so close to someone or something for a really long time, and still have no idea what they are made of inside. In nature, animals use stealth and camouflage to hide their true selves and humans are no strangers to the concept of lying and manipulation to get their way or to get out of trouble. 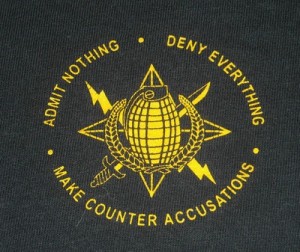 How the professional liar defends the indefensible

There are many ways to discover the truth, some are more preferred than others and these techniques range from the forgiving and loving to the more sinister like waterboarding and torture.

The intelligence communities have long been this planet’s experts on espionage and information gathering. Our government knows better than anyone how to use everything from a job application to an iphone to nuclear bombs to get the information they want.

Bomb being dropped from satellites may sound like my imagination running wild again but back on Friday October 9th 2009, the illustrious CNN reported that NASA’s strike on moon worked, mission official says. According to the article, when NASA wanted to find out more about what the moon was made of they sent up a satellite called the Lunar Crater Observation and Sensing Satellite, or LCROSS that dropped a bomb on the moon to kick up dust and debris. Crazy, I know. Apparently they photograph and analyze the dust cloud, then the images that are taken get processed for years to come. You know, isn’t that how life is. Even with a clear image, sometimes it takes a long time to process what we saw in the explosion.

There’s an old idiom in the English language referred to as “shaking a tree and seeing what falls out” that is often used to describe the search for truth. Less than noble attorneys in America have a rather antonymous idiom they will use that describes lying about the truth, “if you throw enough excrement on the wall, some of it has to stick”. They may use a different word for excrement though.

Sometimes in life when there is just so much garbage on your walls its time to do what the scientists at NASA did and drop a bomb to see what’s really underneath.

Two days ago I dropped one of those proverbial bombs as I sent “one of those emails” to some people I have loved for many years. I have been processing what I did and I know I am not one to revert to outbursts of emotion typically so I have been thinking hard and asking myself, “what would make me roll a holy hand grenade into a room full of people”?

I am not one to often second guess my own actions, but I awoke this morning to the rising clarity that the effect I have gotten from this, has actually been quite effective at clearing off some of the filth from my walls.

Quoting from the book of Armaments

I really don’t want to start any public drama with anyone so I am not using any names, but for the people that I blasted in proximity to my holy hand grenade, I sincerely apologize.

I have gotten some nice soundings and images of my moon shot and the smoke is starting to clear after the past day or two. Honesty is mandatory between two human beings or there is no relationship to speak of.

If this message isn’t for you, then kindly disregard.